Keiron is currently the Deputy Chief Executive of the Exeter Chiefs as well as being a partner in his own Insurance Brokerage, Northcott Beaton Ltd. Working with his business partner Nick Beaton, the company is based in Sowton, Exeter and has been trading since 1990.

His role at the Chiefs and his passion for Rugby developed from an early age. Keiron was born in Exeter and attended Hele’s School where he first discovered his love of rugby. When he left school he went straight into the Insurance Industry in Exeter Working for Municipal Mutual Insurance. He also worked for Nat West Bank Insurance Services in Bristol and Northern Star before setting up the aforementioned Northcott Beaton Insurance Brokers.

He joined Exeter Rugby Club when he was 16 and worked his way up through the sides to be a regular in the first XV. As Keiron is a worker and loves being involved in things, when he retired from rugby he joined the Committee running the Rugby Club and eventually became Chairman. He has been the Deputy Chief Executive of the Chiefs since 2005.

Part of his role is to look after the match day arrangements. Before the Exeter Foundation was set up, Keiron worked very closely with a number of local charities who helped with off-site car parking and bucket collection on Exeter Chiefs match days. Keiron was therefore, very keen to be involved with the Exeter Foundation to continue to support these very worthwhile local causes and to expand the Charity to support other needy causes in our area. 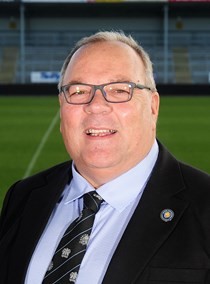