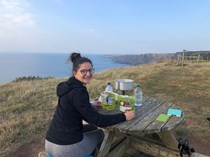 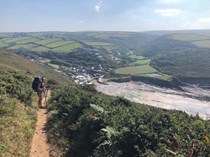 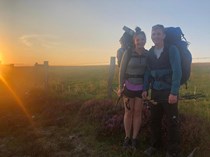 Elle Taylor, Account Manager at local Foundation XV member Astley Media, has embarked on an epic challenge in the name of charity.

Starting on the August bank-holiday weekend, Elle and her husband Stuart took their first steps on a two-week, non-stop sponsored trek along the famous South West Coast Path.

Taking the title of England’s longest waymarked long-distance footpath, the route stretches for a total of 630 miles, starting in Somerset and running along the coasts of Devon and Cornwall, to Poole Harbour in Dorset.

Elle and Stuart started the adventure from Minehead in Somerset, and travelled as far as possible along the South West Coast Path within the two weeks stretch. The couple camped overnight in many of the beautiful locations along the way and all money raised have been donated to the Exeter Chiefs Foundation.

As well as its incredible social mobility benefits, this journey was also a personal one for Elle. The decision to embark on the adventure came when her and Stuart decided that they wanted to try something different – something that would test their limits and push the boundaries of their comfort-zones. For them, the walk was an opportunity to demonstrate self-determination and to prove to themselves that they can succeed in the challenge even when it starts to get difficult.

Elle Taylor, Account Manager at Astley Media, said: “My husband Stuart and I absolutely loved our 137 mile walk along the South West Coast Path. There were times during the two weeks when the steep hills and heavy rucksacks were extremely challenging, but we were motivated to keep going to raise as much as possible for the Exeter Chief’s Foundation. We are so thrilled to have hit our fundraising target and raise over £1,000 for the Foundation which supports important causes in and around Exeter. During the walk we enjoyed beautiful views and plenty of ice cream and we can’t wait to return where we finished and see how far we can get next time”

Trustee, Alan Quantick added; "The challenge that Elle and Stuart undertook was no mean feat, and to top it all - they completely smashed their fundraising target raising nearly £1,500 for the Foundation.  This is an amazing result for their efforts and we wholeheartedly send our thanks to them.  All funds that are raised from challenges such as this and donations from our Foundation XV members allows us to support charities and projects locally and gets put back into the community."