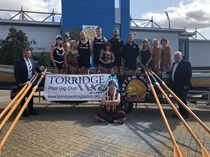 The race was over 21miles starting at London Docklands, passing several London land marks such as the Shard, the Houses of Parliament and the London Eye as well as passing under 26 London bridges including Tower Bridge. The course continues over the Oxford /Cambridge University boat race course ending up in Richmond.

Many crews dress up in fancy dress to makes it a spectacular spectator event and this year, the crew from Torridge Gig Club were flying an Exeter Chiefs flag and wearing feathered headdresses in homage to the Club.

The gig club raced n a traditional Cornish pilot gig which is a six-oared rowing boat, built of Cornish narrow leaf elm, 32 feet long. It is recognised as one of the first shore-based lifeboats that went to vessels in distress, with recorded rescues going back as far as the late 17th century.

The Torridge crew was an all lady crew apart from the cox.  Nick Arthur Chairman of the Club said “Many of our members are supporters of Exeter Chiefs and thought the spectacle of the River Race would be a great opportunity to show our support, while helping to raise funds for the Exeter Chiefs Foundation.  Training has gone well, and we hope many people and businesses will get behind the event and donate to a worthy cause.

Chairman of the Exeter Chiefs Foundation, Tony Rowe OBE said “We’d like to extend our thanks to Torridge Gig Club for their fundraising efforts and look forward to seeing the Chiefs flag on the River Thames“