Exeter Foundation Trustee Alan Quantick and Exeter Chief’s head coach Rob Baxter visited the Duchy School, Bradninch on Wednesday 27th June to receive a cheque for over £1,800 which had been raised by the children for The Exeter Foundation.

This is the second year that the children have taken part in a sponsored run in aid of the charity. All of the children ran the mile, the younger pupils accompanied by the older children and they were cheered along the route by an enthusiastic group of parents. It was a fantastic effort from all the children, including Joe Nisbet (a pupil in Brunel Class) who completed the course on crutches with a broken leg.

Headteacher Claire Baillie said, “We were thrilled to have exceeded the total raised last year. The children and their families are really keen to support The Foundation as it is a charity which helps families in our area. There is such a tremendous atmosphere on the day of the run and all of the children were determined to finish the course. For the younger children it is quite a distance for them to cover, but the sense of achievement afterwards was tremendous. There were some exceptional fundraising efforts by pupils and three pupils (Heidi-Marie Knight, Joshua Cantril-Hore and Kalum Meecham) raised over £100 each. They were each presented with a special award by Rob Baxter, who also brought along a ‘goody bag’ from the Exeter Chiefs.”

“We are also delighted that the school’s achievements have now been recognised by the Foundation as we have been made a ‘Bronze Friend’ of the Foundation. This is a real achievement for a school of only 180 pupils.” 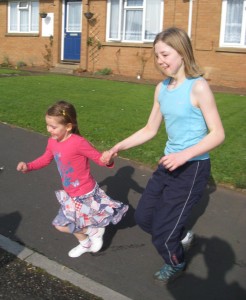