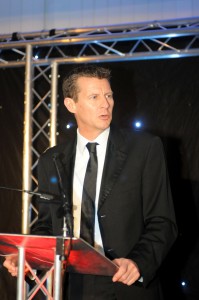 The inaugural Express and Echo Sports Awards was held at Sandy Park on the 19th January and was thoroughly enjoyed by all those in attendance.

With over 200 guests attending the evening, heads were held high as 16 category winners were invited to the stage to collect their awards.  With a wide variety of categories being presented ranging from ‘Unsung hero award’ to ‘Sports personality of the Year award’, the support from friends, family and local sponsors was outstanding.

To kick start the evening, Tony Rowe, Chairman of the Exeter Foundation, took to the stage to announce the success of the first 16 months of operation. Tony announced that the Foundation has successfully raised over £110,000 to date, which helps to assist local projects and clubs in and around the Exeter area.  Shortly after, Andy Phelan the Express & Echo’s newly appointed editor introduced himself and explained what a pleasure it was to be part of the evening raising monies for such a fantastic cause.

After some hearty food, the atmosphere began to build as the auction and raffle took place. This raised an impressive £2,220.70, which was kindly donated directly to the Exeter Foundation.

As the night progressed, special guest Steve Cram MBE was welcomed to the stage to share some of his Olympic history and sporting anecdotes. Steve’s inspirational speech helped set the atmosphere for the upcoming award ceremony, which was hosted by Mark Tyler.

As the ceremony began, the winners of each category where invited to the stage to collect their awards and greet Steve Cram.  As the awards progressed, a short break half way through the evening allowed time for the crowd to be amazed by the surprise performance of the night, a performer who certainly amazed the audience.  Abas took the stage and showed of his impressive football skills which were second to none. Shortly after, the ceremony was back underway and praise was given to all shortlisted individuals and teams.

To finish off this spectacular night, the 6 piece band BasherTate hit the stage to perform some classic pop songs and close down the evening.  The Exeter Foundation would like thank all guests who supported the charity and are thrilled at the generosity on the night.

To view all official photographs of the night taken by James Millar, please follow the link below: 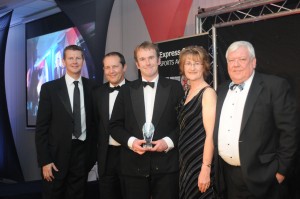 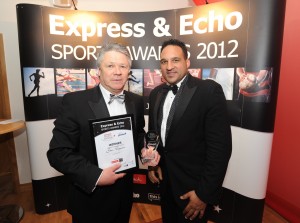