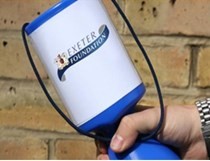 The ‘Foundation XV’ is an initiative that is going into its fifth season and officially recognises and promotes businesses who support and raise money for the Foundation. To date Foundation XV members have raised in excess of £130,000, £40,000 of this in the last season alone.

The Foundation supports many local organisations, charities and projects in and around the city – all of which is made possible with support of local companies and individuals."

The Foundation XV is renewed each season. For more information on how to get involved please email enquiries@exeterfoundation.org.uk