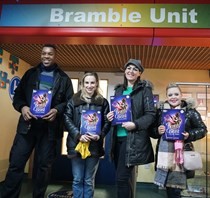 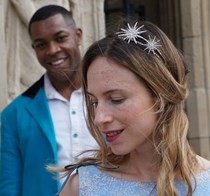 Children in hospital and care home residents watched a Christmas pantomime beamed live to remote screens after a pioneering initiative by the Exeter Northcott Theatre.  Youngsters in the RD&E’s Bramble Ward enjoyed a performance of Beauty and the Beast on Tuesday, December 10.

The live stream was made possible thanks to a generous £3,900 donation from the Exeter Chiefs Foundation.  An audience gathered in the hospital ward’s school room, joining in with the interactive fun, while some accessed the live feed from mobiles and others watched on devices from their beds.  At the same time, pensioners gathered around screens in residential homes, including Harbour Rise in Paignton, to enjoy the festive play.  After the show, cast members visited the ward, handing out signed programmes and posters and singing Christmas carols.

Artistic Director and Chief Executive Daniel Buckroyd, who wrote and directed the show, said: “Pantomime is one of the things that makes Christmas special but unfortunately some people are simply not able to make it to the theatre.  There are challenges to webcasting shows but we try to be as innovative as possible, particularly when it comes to access performances.  The Exeter Chiefs Foundation has been incredibly generous in supporting this initiative. We launched live streaming last year and we hope to be able to make these events more regular.”

The audience at the 10.30am performance was made up mostly of local schools.  Beauty and the Beast is the second show to be beamed live to a remote location by the theatre, following a webcast of Jack and the Beanstalk last year.  It was streamed online, via You Tube, but restricted to a small, remote audience.

The production follows the fortunes of Belle, the most beautiful girl in Paris, played by Sarah Moss.  Moss visited Bramble Ward after the show along with Samson Ajewole, who plays Prince Valentin.  Anna Stolli, who plays the evil enchantress, Nightshade, and Francesca Pim, who plays Belle’s sister Soufflé, also met children on the ward.

The Exeter Chiefs Foundation awarded a grant to the Northcott to fund the purchase of video equipment to set up live streams.  Trustee Keiron Northcott said: “The Northcott Theatre is a huge asset to Exeter’s arts and entertainment scene and we’re proud to have been able to support them with this project.  Particularly during the festive season, it’s great that the theatre is now able to reach audiences in different communities and allow more people to enjoy the arts.”

Among the locations to sign up to the feed were Stallcombe House, which provides residential accommodation, and a place of work and personal development, for up to 27 adults with learning disabilities in Exeter.

Green Tree Court, a care home also in Exeter, also joined in.  Merle Weiner, Head of Activities, said: “Our Residents thoroughly enjoyed themselves.  “Green Tree Court Care and Nursing Home would like to thank the Northcott Theatre for organising for our residents to be able to watch Beauty and the Beast live from the theatre.  It was wonderful that all our residents could enjoy the panto and the smiles and joy on their faces was evidence that everyone thoroughly enjoyed the show.”