On 22nd October 2012, a local team of intrepid explorers returned home from their Himalayan adventure where they raised in excess of £5,300 for charity. Lead by ex-Royal Marine Officer Paul Mattin, the adventurers including Santander local bank manager Bruce Wills, South West Communications Directors Brian Lodge & Sarah Flowers and their partners Kevin Flowers of TFQ Architects & Nina Lodge headed to Nepal on 28th September to begin their expedition to raise money for local charities, one of which being the Exeter Foundation.

An additional £7000 was raised by local sponsors in order for injured Royal Marine Captain Simon Maxwell an extra medic to join the expedition planned by Wilderness Solutions and Vision:Re. For Simon, who lost his leg in Afghanistan, completing such a challenge became an ambition, one he has now with the help of local backing been able to fulfil.

However, a tragic airline accident combined with poor weather conditions left all flights grounded leaving no way of getting to the mountain airstrip of Lukla where the planned trip to Everest Base Camp was scheduled to begin. It was to the credit of esteemed team leader Paul Mattin, with advice from local experts, that a new and equally, if not doubly, exciting trip plan was arranged at such short notice.

Achievable strictly on foot and with a Mountain Pass of 5400m, the Annapurna Mountain Range, the highest mountain range in the world, was the most logical as well as most popular alternative. Known as “the Holy Grail of trekking,” the Annapurna offers the most unbeatable scenery, cultural diversity and reaches heights the equivalent of the top of Everest.

Stopping along the ascent in numerous different villages including Chame and Manang, the team had to battle against the dropping temperature and ever rising altitude. One plus to the cold weather meant that yaks were becoming a more and more frequent sight, and the team soon learned that a yak burger made the perfect lunch at the 3000m checkpoint!

Although battling against altitude that was the cause of several headaches and coughing fits, the group eventually panted their way to the Thorung La Base Camp where they prepared for a gruelling 12 hour day where they would climb to a height of 18,000ft over the top of the pass. Gasping for oxygen in the thin air, all the hard work paid off as the most spectacular views of the Himalayas, that looked close enough to touch, came into view.

After a group celebration, the only way was down with the descent of 4,600ft taking its toll on the joints of our travellers! Eventually they reached the town of Birethanti for their last night in a Sherpa lodge before making their way to Chitwan National Park, the halfway point back to Kathmandu, for the final phase of the trek.

An elephant-back safari meant that our team were able to experience the Nepali wildlife before kayaking down the river into the sunset – an extraordinary end to and extraordinary trip!

Back safely in Kathmandu, the team reflected on the pain, the laughter, the memories that will last a lifetime, the moments of pure desperation, the humorous stories to take home  and the complete elation they’d experienced over the course of the expedition and prepared for their return.

“We met people with absolutely nothing who were happier than anyone we have ever known. Our team members became the closest of friends as we experienced cold, hunger, pain and complete elation together,” said team member Brian Lodge. He then went on to state, “none of this could have been achieved without the skill, knowledge and good humour of Paul ‘Mad Dog’ Mattin - truly one of the last great British Adventurers of our time and someone who I would trust to take me anywhere and more importantly get me back!”

Undoubtedly the incredible memories of their Himalayan adventure will stay with our trekkers forever.

Wilderness Solutions and VisionRe: are planning another Everest Base Camp Trek which is set for 2014. To find out more please email enquiries@sporting-vision.co.uk. 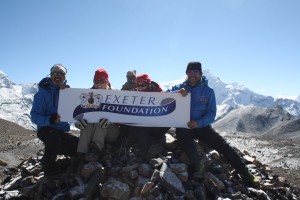