Throughout the ongoing pandemic, Exeter Rugby Club and it's official charity, the Exeter Chiefs Foundation, have continually stepped forward to help in whatever way they can to help the lives of people living within the local community.

Equally, our local NHS have done exactly the same and last weekend the Chiefs and the Foundation were able to give back to those heroes with a sizeable donation of £25,589.97 to the Royal Devon & Exeter NHS Foundation Trust.

Followers of the club will remember that back in October of last year, the club paid homage to the remarkable work done by the National Health Service, with a bespoke kit worn by our players as they took on Worcester Warriors in the Gallagher Premiership.

The rainbow-inspired kit was inspired through our #lookgoodchiefs competition, which we ran in April 2020, where we asked fans of all ages to design their very own Exeter Chiefs playing kit. After hundreds of entries, it was Richard Bolt’s effort that was selected as our overall winner.

Following that game, the club have since been collating the money raised through shirt sales, auction proceeds of signed match-worn jerseys, a raffle of a signed and framed match shirt, as well as the sale of commemorative t-Shirts and pin badges.

Thanks to our magnificent fans and kit sponsors, we were able to welcome Suzanne Tracey, Chief Executive of the Royal Devon & Exeter NHS Foundation Trust, together with Head of Fundraising, Ian Roome, to receive the funds from Exeter Rugby Club chairman and chief executive, Tony Rowe OBE, who is also chairman and trustee of the Exeter Chiefs Foundation. 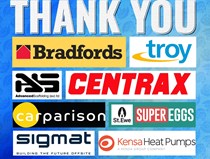