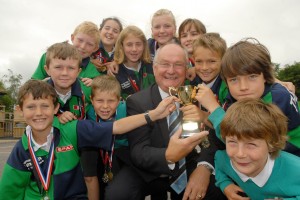 Pupils at The Duchy School in Bradninch exceeded their proceed-boosting expectations by collecting more than £1500 which was presented to the Exeter Foundation.  Children as young as four raised sponsorship and conquered a one mile lap of the town earlier this year.  Head teacher, Claire Baillie, explained the challenge to the Foundation;

“The challenge for everybody in the school was to run (or walk) a mile around Bradninch with the staff completing a relay marathon between us. We paired up the older children with the younger ones, so it was a real school community effort. Having spoken to the older children about staying with their younger partners and not leaving them behind, we were highly amused to see the 4 and 5 year olds go off like a bullet out of a gun, dragging their older partners behind them.”

“The older children then did another mile, this time against the clock.  Meanwhile the staff were plodding out their 26miles around a very hilly Bradninch. We had a great day. It is the sort of event which brings out the best in our children. There was a huge sense of camaraderie amongst the children, and I saw staff running who have not done so since their own school days!”

Proceeds from the day where presented to Alan Quantick who is also the finance Director of Exeter Chiefs Rugby Club.  He explained the work of the charity to the pupils and also presented them with a trophy following their success at a recent tag rugby tournament.