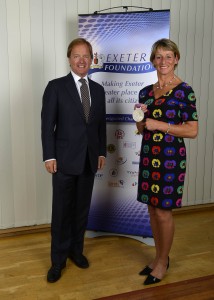 The work of the Exeter Foundation was again highlighted in all its glory as the charity celebrated its annual presentation dinner with more than 170 guests at Sandy Park.

The Foundation, which was launched in 2010 with the vision of assisting the local people and promoting a sense of community, has been a rousing success since its inception and has to date raised in the region of £160,000.

At the home of the Exeter Chiefs Rugby Club, representatives from the 18 designated charities were called to the stage to be presented with cheques from British Olympian Mary King, who also announced locally-based projects who had also benefitted from support from the Foundation during the past month.

Welcoming guests to the annual event, Exeter Foundation Chairman Tony Rowe, who is also the Chairman and Chief Executive of the Exeter Chiefs and South West Communications Group, praised the efforts of all those volunteers who had contributed a "great many hours" to helping raise funds for the various causes.

Mr Rowe said: "Once again the Foundation has enjoyed a remarkable year in terms of the immense support we have received from the local community. As trustees we are delighted to once again be able to hand over these much-needed funds to so many deserving charities. The work that all these groups and organisations carry out is simply incredible and we know the money raised for them will help to make a real difference."

Such was the outstanding efforts of fundraisers, the 18 charities were given an added surprise on the night with an additional £500 added to their monies raised.

As well as Mrs King, the Sidmouth-based Equestrian star, the other guest speak on the night was the Right Honourable Hugo Swire, MP for East Devon.

Fellow trustee David Bird, Managing Partner of Clydesdale Bank, later invited those in attendance to support the Foundation further by joining as a Foundation XV member.

The Foundation XV allows supporters to pledge an amount of support to the Foundation for the season to raise a minimum amount of money and in return, the Foundation will provide access to various marketing and press release opportunities, using its strong links with the Exeter Chiefs.

Celebrity chef Michael Caines, another of the Foundation's trustees, then joined the stage to announce the fundraising efforts of all its supporters, awarding The Wooden Spoon with a gold certificate and the title of a gold friend of the Foundation for raising the most money throughout the year.

The Express and Echo were awarded silver and the Duchy School, Northcott Beaton, SW Communications, Exeter Chiefs, Clydesdale Bank and Thrifty car and van rental were awarded bronze certificates for their efforts.

The evening was rounded off splendidly with both a Tombola, which raised an additional £1,500 to the pot, as well as a performance by ‘The Late Shift’ allowing guests to dance and party into the early hours.

All in all a ve 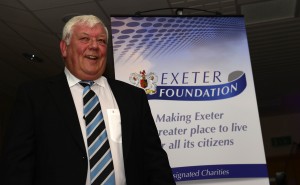 ry happy and rewarding evening had by all! The Exeter Foundation would like to thank all in attendance for their generosity and support.